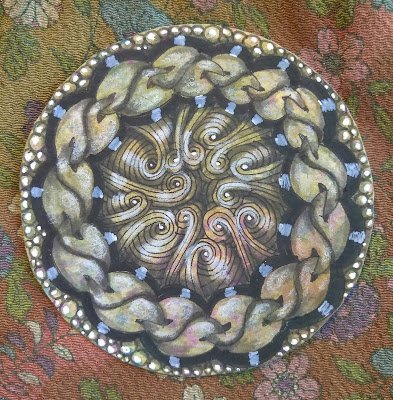 Noom is the latest pattern presented by Zentangle HQ. I thought I'd give it a go in the round along with some of my Mac 'n Cheese (Sandswirl and Tipple) patterns since I enjoyed them so much last week. I used a watercolored zendala. 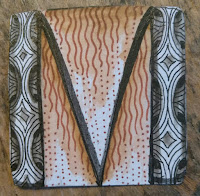 Another Bijou in my alphabet series.  I'm creating headers for my pattern library binder. 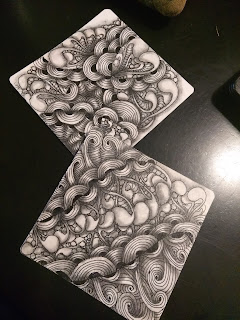 
I had a pretty intense week and took the occasional break to Zen. Armed with only a pen and a couple of tiles I had pre-strung I did a little bit here and there. I shaded them last night and finished them with a coat of clear nail polish. I generally avoid graphite shading because I tend to make such a mess, but not only does the nail polish seal it all, it also deepens the contrast which I lovelovelove.

Joann Cook
from Hoover, Alabama
sent me this 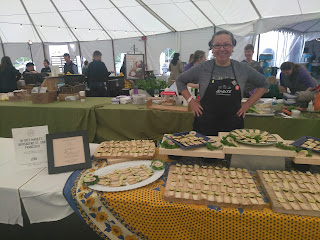 The Cheese Stands Alone;-)
me at The California Artisan Cheese Festival
Petaluma California

This past Friday I participated in a competitive event where I presented my  "Ultimate Best Bite" at an event celebrating California artisan cheeses. 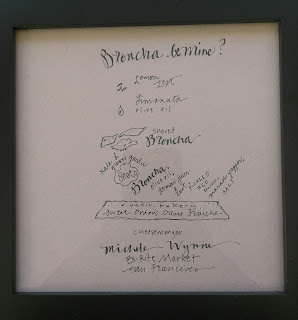 I'm a Cheesemonger at a specialty food market and have only been doing this for two years. It was my first time ever competing and participating in an event such as this. I had to create 200 bites and then stand at a table all day talking about it, over and over and over... It was exhausting!

Thanks so much for stopping by. Your thoughtful and generous comments delight and inspire me!

Email ThisBlogThis!Share to TwitterShare to FacebookShare to Pinterest
Labels: I am the Diva Challenge, Made by Joey, Travelling Tangles Project