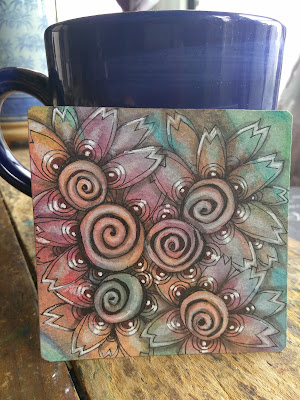 
This weeks Diva challenge was inspired by the latest and most delightful video in the Kitchen Table Tangles series from Zentangle HQ. This one features Indy and Mazzy, Molly's young daughters. They are super cute as they masterfully demonstrate their tangle "Zingo" (I think it's their tangle). 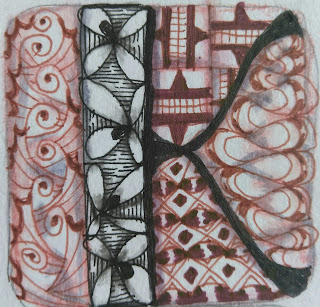 This is the latest in my Bijou series as I work my way through headers for my pattern library binder. I've adapted Joey's strings/starters to feature her selected pattern within the confines of my letter font using black ink to define that part of it, then using however many additional patterns I can include within the remaining parts of the "string" using brown ink. 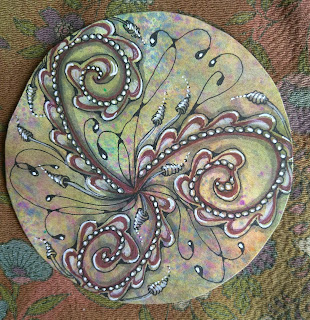 
This is probably the first time I've tackled the IAST challenge before the Diva and Joey. I had a couple of water color zendala rounds I'd created for a Travelling Tangles swap that I never ended up signing up for. I've had them on the back burner in the event I needed to produce something organic. It's funny though, because as I'm looking at it now, on the screen, as I type this, I'm struck with the feeling that it doesn't feel finished. Hmmmnnn....

I just found this Travelling Tangle I finished last week. I'd forgotten all about it. If I'm not mistaken, the Kitchen Table Tangles post had just appeared on my feed as I was pondering this start. 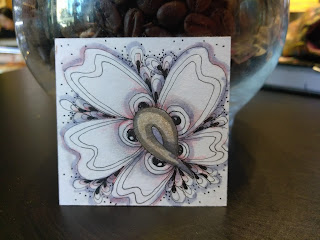 Debra Huff, from Oceanside CA, sent me this "Twinchie" (or Bijou) with just the gold metallic loop in the middle. I went on a crazed Feng Shui photo purge of my phone pics and sadly deleted the starter pic. I'm not too fond of the clumsy brush pen marker shading...but...it is what it is...my first attempt at "Zingo".

Anyhoo...Thanks so much for stopping by. Your thoughtful and generous comments delight and inspire me!

Posted by Michele Wynne at 8:39 PM

Email ThisBlogThis!Share to TwitterShare to FacebookShare to Pinterest
Labels: I am the Diva Challenge, It's a String Thing Challenge, Made by Joey, Travelling Tangles Project